To sum the race up in one word, amazing!

For this race I decided to have a completely different strategy than usual.  Usually, I put myself toward the very back of the field at the start. The reason for this, to be candid, I am lazy. The guys in the back usually have a slower pace. This allows me to sit back and take it easy. Something that I think is good when you have to ride 64 miles of technical single track. With this strategy I can pass when the time is right. In the past this has been pretty successful. This year Jenn talked me into placing myself toward the front of the field. Somewhat reluctantly, I went ahead and followed through with this idea. It changed how the race went drastically. Usually I don't get passed that much and I pass a couple of folks every now and then. This time I still didn't get passed much, but I also didn't pass many folks. The most passing that happened was when someone, either me or someone else, had to take a bio-break or something like that. The other huge difference is that sections that usually were a hike a bike were not. The reason, I think, is that everyone could clean sections that the back of the group would not. This could be either because of skill or there are just so many people piled up at this point that you can't keep your momentum. I think the later is more likely the truth. The biggest problem I had riding with this faster group is that I wanted to be competitive. This caused me to regress in behavior and not consume enough fluid and food. I kept thinking "I have to keep up with these guys" rather than "I have 64 fluid miles ahead of me, I need to drink some".

This sort of mentality also led to me watching the guys in front rather than watching where I was going. Doh! I let my front wheel turn 90 degrees to the frame and then boom, I was on the ground. Fortunately I was not going fast, hence why I call it a fall rather than crash. At the time I didn't think anything of it. It didn't hurt, wasn't bleeding much and really didn't seem to be an issue.

Not to sound like a total suck up that is trying to make his wife happy here. Jenn is an awesome person to have in your support crew. I won't try to sugar coat it. I was shooting for a 6:30 finish and came around loop one at 3:30. I was grumpy about that and the fact me stomach was revolting on me. Also my knee was starting to feel pressure from the fall. I think that it was starting to swell at this point. All of that combined didn't make me the nicest person in the world. Jenn just kept a smile on and told me that I needed to drink more water during the second lap. That is all I really needed to hear and she was totally right!

During the second lap I took a completely different mindset. Instead of worrying about how fast I was going I went for finishing the race comfortably. This was for a few reasons. One, I really wanted to be lively and fun for Jenn when I finished the race. After all she had taken her whole weekend to come to my race. Not only that but she also skipped out on her softball tournament that was over the same weekend. I didn't want to finish the race blown. Two, I wanted to enjoy the event more rather than just trying to destroy it. Funny thing is that my time was only increased by 15 minutes slogging around rather than pushing my pedals hard the entire time. I almost wonder if I would have done better taking it "easy" the entire race rather than pushing it so hard the first lap. With this new mentality of taking it easy and enjoying the race my stomach started to feel much better and my mood was drastically improved. My knee on the other hand, was a separate story. What was originally just pressure building in my knee was turning into discomfort. I just kept pedaling on and really did enjoy the rest of the day.

Ride back into town

After getting back to the finish line I said hello to Jenn, complained about my knee, put a jacket on and headed straight back into town. The reason I didn't spend any time at the finish line shooting the breeze or seeing what free stuff I could score was because I didn't want my knee to stiffen up any more. I figured the sooner I got those last 2.5 miles finished the better.

The post race celebration was pretty cool. They gave me a filled growler of beer, Shift beer from New Belgium and price money! Yes you just heard me right. I won prize money. Here is a picture for proof. 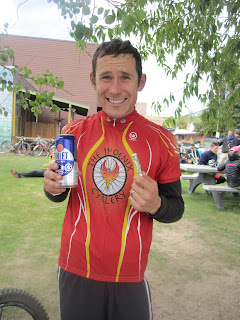 Okay I'll tell the real story now. Rather than hand out tickets or something like that they gave you $8 to spend at the food vendors. I like to think of it as prize money rather than a post race meal :-) After all that concept is a lot more fun.

The Original Growler is by far one of my favorite races. The reason for this is that no matter how fit or number of times I do this race it will always be a challenge. This is because it does not play into my strength of long steady climbs and also because it is a really technical race. This is the first year that I have felt confident on many of the technical areas, where in the past I have not felt that way. If you want to see all of the pictures that Jenn took you can follow this link 2012 Original Growler photos. Also you can check out race results, just my result by age group and the overall results.

If you made it this far, thanks a lot for reading.
Posted by Unknown at 9:49 PM 3 comments: