Simply put the Breckenridge 100 is a tough race. It would not have been nearly as easy if I had not had the best support crew in the world!

For what ever reason the race was on a Sunday this year. So the plan was for Jenn, my mom and I to head up Saturday. One of my buddies wanted to come up but we didn't have room in the SUV for 4 people and all of the bike junk so he was to meet us later in the day on Saturday. Then on Sunday we would watch/do the race and head home right after awards. We also were lucky enough to get a free stay at one of Jenn's friend's condos in Silverthorne. It had an awesome view of a the area from the entire place. The whole back side of it was glass. Really cool!

Everything went as planned on Saturday. We all arrived at a reasonable hour, didn't hit much traffic, had a pretty good spaghetti dinner, hike afterwords to settle things down, good chat during it all and a good night's rest. The only hitch was the brakes on my bike came out of adjustment from the drive up. I had air in the lines, bummer. I fiddled with them enough to feel comfortable to race in them and didn't think much of it.

Sunday the race started at 6am, so I was up at 4:30 choking down as much oatmeal as my boddy would tollerate and also trying to hydrate. It is this point in time that I feel like bike racing is nothing but work. After breakfast we stuffed all of the things we would need for the day into the car and made the 35 minute drive to Carter Park, aka race headquarters.

One of the aspects I love about this race is how low key it is. Sure there are plenty of super talented guys there, sure the race is going to totally kick your butt, sure only about 60% of the entrants complete it, but, with all of that, people are still laid back and looking forward to a full day on the saddle. So with that setting you won't be surprised how the day started. They go through the usual sportsmanship talk and then they just count down from 5 and say "go" to get the day started. Leaving "go" lower case was intentional, it is the exact opposite of how the Growler starts with twin shot gun blasts. Unless you knew there was a race going on you could easily miss the start of it. Because you have to go through town for the first lap there is neutral start out. This compounds the slow easy start of the race feel.

Once we got started I was able to settle in a little more. I think that it usually takes me about 40 - 60 minutes to get my "groove" on the saddle. For me this was about the top of Wheeler Pass. This is actually one of my favorite parts of the race. The only issue I have is the whole heights dilemma. I don't know what it is but looking down when at that elevation, I start to get nervous. Other than that slight awareness of heights the view is breath taking from up there. As hard as it is to do so during a race I try to sit back a little and tack it all in. After Wheeler you bomb down into Frisco. I really do mean bomb. It is a super fast descent to the paved bike path. Looking at my tracked log top speeds were just under 30 mph. It is super fun! On the first lap I had something really odd happen. Getting on the paved path from dirt I hit a small bump while remaining seated and moved the nose of my saddle about 3 inches up, this was not going to be something I could ignore for another 90 or so miles. I stopped at the first aid station hoping that they would have allen keys on hand to work on the seat. I asked if they did and one of the volunteers had to dig through his own stuff to hand me a multi-tool. I really appreciated him getting one for me but if I had known about this would have just got my own out. Oh well. After getting the saddle fixed I ate a banana and set off again. The single track from Frisco back to Breckenridge is just awesome. There are technical spots and it is a fairly mild climb. This is the sort of riding I love to do. I managed to pull the first lap off in 3:20. That is really awesome considering it took me 3:28 last year and I had a mechanical problem. When I got back into town I saw the best support crew in the world!!!

After getting new bottles of Perpetuem and filing my camel back up I set off for lap 2. In my opinion this is one of the tougher parts of the course. It is either lap 2 or getting up to Boreas Pass on the way out to Como. The climb up French Flume went pretty well. I conserved energy where I could and felt really strong for the descent down. I guess I felt too strong. About 1 minute into the descent I cut my tire. The hole was big enough that the Stans wouldn't seal it up. So, I stopped, and put one of my spare tubes in, ugh. Again, oh well, what can you do? It is only a bike race. After getting the tire taken care of I set off again. I don't know if it was the elevation, pumping up the tire or what, but a headache set in that was bad enough I could feel my heart beating in my head. Not fun. I stayed positive about this until the Colorado Trail. For what ever reason the slow long gradual climb up this just killed me. It was at this point I started to wonder if going out for the third lap was even going to be an option. Out of shear stubbornness I completed this lap. Comparing myself to 2011 I lost time here. I came in at 7:20 while in 2011 I came in at 7:11. I could chalk that time difference up to my flat tire. I really think that it had more to do with my wanting to quit more than anything else. Once in Carter Park my awesome support crew had my camel back filled, bottles swapped out on the bike and a banana in my hand before I could even comprehend all that had just happened. It was wonderful. When they asked how I was doing I described my headache and they gave me 2 Ibuprofen. After getting ready for the third and final lap I head out.

I eluded to this a little earlier. The climb up to Boreas Pass from Breckenridge to Como is brutal. You are tired, not riding on any single track and it is usually pretty hot. Fortunately I ran into Paul Tanguay on the way up. Chatting with him while riding really improved my mood and took my mind off the headache. Paul and I rode together for some time and then eventually split. After Paul and I split I think that the Ibuprofen really kicked in. I started to feel like a million bucks. Well at least as one can feel after having been on the bike for about 8 hours at this point. It was here that I found a good group of 68 milers. I was able to stay with them for most of the third lap. I got dropped when they made the last climb up to Boreas Pass. I didn't take it personally, put my head down and tried to finish as strong as I could. For what ever reason I started to think about having a soda at the top of Boreas. Unfortunately they were out by the time I go there. On the way down from Boreas I started to feel bad for the folks that were still slogging up to the pass. The reason is that they were not going to make the 4:30 cut off time. I wanted to tell them but really didn't know if that was the right thing to do. I decided to not do anything and passed them by. Once you get to Boreas from Como, the race is basically over. It is all down hill from there. I would love to ride Banker's Tank fresh. It seems to be some really nice single track. By that point in the day my hands and wrists were done with rocks and roots banging me around. Surprisingly that was all that was really bothering me at this point. I think that the Ibuprofen had something to do with this. I managed to roll into Carter Park in 11:17 this year. That is 8 minutes slower than my first attempt was. I think that if I could get rid of the two mechanical issues and pull my head out of my butt during the whole race, not thinking about quitting on lap 2, I can still nail that 10:30 finish.

Overall I just love this race! It is such a great day. There is loads of single track, it is super hard and the views are stunning. What more could you ask for in an endurance race!?!?! Guess I might be back at this again next year. We will have to see what affect kiddos have on the racing season. 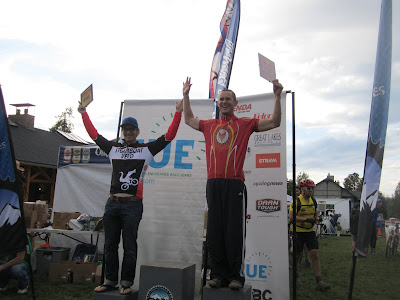 Here is my Garmin Edge 500 track