Jenn, Devon, Cara, Tyler, Jess and I just got back from an eight day vacation to Costa Rica. We stayed at the same village that Tyler and Jess just purchased their villa at. This post and the next few are going to describe each of the days that we had there. Enjoy and please feel free to post comments :-)
This is how happy we started in our trip. 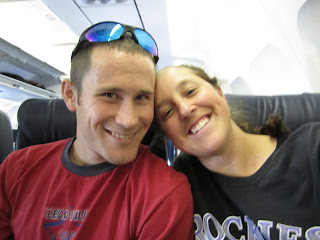 Ready to roll and get started on our Costa Rican adventure. We had more than the average number of oportunities for Continental Airlines to shine and show how great of a company they could be. In the end they failed miserably every single time. In all honesty we should have seen it coming.  After we parked at DIA the gate would not open for our shuttle bus. A service crew came by and the solution in the end was for the bus to back up and go out a different exit. This was not really to big of a deal until we realized leaving at one in the morning from Tyler and Jess' house was a waste as our flight was canceled. The solution for that was to transfer our flight to American Airlines for eight in the morning. This was all good until this flight was delayed to 9:30. This would cause us to miss our connection flight from Houston to SJO. What you may not have thought of reading just this little bit is that between each flight reschedule we had to get at the end of the line for either American Airlines of United and wait our turn to have the flight fixed. As you can imagine we were not the only ones with this dilemma. So it was a little stressful and chaotic. Finally we ended up flying Continental to Dallas at 8:15 in the morning.

Fortunately Dallas also had a bar for us to work through our frustrations.
After this our moods improved and Devon and I decided it was time to duke it out with the mini-swords you get with some drinks.
While at Dallas the beauty Jennifer took a picture next to a steal artwork structure. I thought that Jenn's dad would have liked this one. 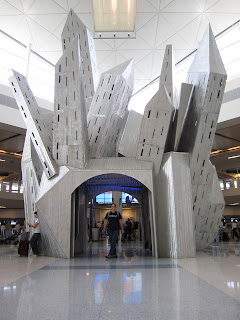 Finally our flight left from Dallas for San Jose on American. We finally arrived in San Jose around ten pm. Fortunately the Vamos Car rental guy, Alex, was super nice and waited for us even though we were really late at this point as our original schedule had us arrive around noon. Of course this could not go as planned either. When Tyler originally reserved the car he explicitly asked that it be an automatic as not many of the party were comfortable or able to drive a manual. To follow trend from the rest of the trip it was a manual. Because of this I ended up having to be the primary driver. After going through all of the paper work with Alex to rent the car we set out in the Prado for our four hour drive for OSA mountain.
Even though it was my first time driving in Costa Rica and it was two in the morning by the time we actually pulled up to our villa the drive went pretty well. Before setting out on our drive Tyler was explaining to me how difficult it is to drive in Costa Rica. Originally I dismissed his warnings. After this experience I-25 during rush hour is super boring. In Costa Rica the average sized pot hole would make the six o'clock news here. Not only that but there are pedestrians, dogs, horses and stalled cars on the road. Also what is called a 'high-way' in Costa Rica is a glorified golf cart path. Seriously the road in front of my house is wider.